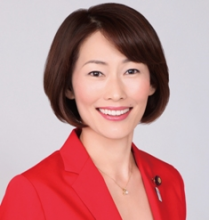 Elected 2007 and 2013, Tokyo Metropolis
Current Responsibilities in the House of Councillors（as of November 15,2017)
Committee on Economy and Industry
Committee on Budget (Director)
Special Committee on Political Ethics and Election System

2016
Minister in charge of the Tokyo Olympic and Paralympic Games

1993
Graduated from the University of Tokyo (Faculty of Economics)